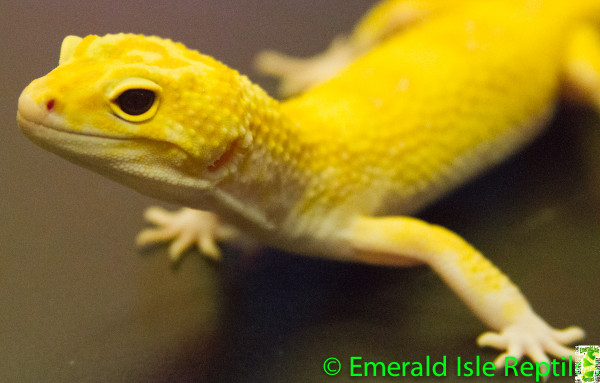 Leopard geckos in captivity are commonly kept in 10 to 20 gallon tanks, with more space needed for multiple geckos. Males are territorial, and can behave aggressively towards other males in the same enclosure. The gecko needs a similar habitat to many other reptiles. This includes a warm and cool area of the tank and monitoring of the temperatures for the safety of the animal. If the temperature is not controlled correctly it can cause burns. Substrate is provided to the animals but there is controversy over which ones are safe. Leopard geckos have been known to ingest the substrate which can block the animal's intestines. Because of this most owners use more solid substrates, ranging from paper towels to slate tile.

Because moisture helps the gecko to shed, owners typically provide a moist hide for the gecko. Geckos also will rub against rough surfaces to remove their old skin. Sometimes it is necessary for the owner to assist in removing the skin around the gecko's toes.

The leopard gecko is typically a cream to yellow color, with black spots similar to those of a leopard. However, selective breeding in captivity has produced varying colorations, including high yellow, tangerine, lavender, blizzard (solid white or gray), and albino. Atypical patterns include striped and patternless (no spots or stripes) varieties. The typical total length is 6 to 11 inches, with some captive specimens exceeding 11 inches. At birth, a leopard gecko has no spots. Instead, the body is covered in alternating darkand light yellow bands. These bands fade within one year.

The leopard gecko is one of only a few gecko species (all of them members of the subfamily Eublepharidae, a small family of tropical/subtropical species found in the world) that have eyelids. This helps the gecko keep its eyes clean and particle-free in its dusty environment. Like most other geckos, the leopard gecko can clean and moisten its eyes using its tongue. Unlike other species of gecko, leopard geckos have small claws instead of adhesive toe pads, which prevents them from climbing smooth vertical surfaces. However, their claws give extra traction on the ground and are helpful in digging. These differences have been cited as a possible reason to name Eubelpharinae as a different family apart from geckos.

Like most lizards, the leopard gecko can drop its tail, in a process called caudal autotomy. When frightened or disturbed (grasped), muscles at the base of the gecko's tail constrict and snap the vertebrae, severing most of the tail. The detached, wriggling and spasming tail distracts the potential predator as the gecko makes its escape. Although the leopard gecko will grow a new one in time, around 40 days, the regenerated tail will differ from the original, appearing bulbous and inferior. The tail will never look the same. Geckos will also use their tails as storage devices. When a leopard gecko eats, it stores part of its food and converts it into fat, which goes to its tail. In times of hunger, leopard geckos gain nutrition by metabolising this fat reserve and therefore can survive a period of weeks without food. A healthy leopard gecko's tail is wider than the width of its neck.

Leopard geckos can be fed a staple diet consisting of insects including crickets, mealworms, grasshoppers, and any viable insect that is no bigger than the width of the geckos head. Insects should be dusted with vitamin and calcium supplements every other feeding for adults and every feeding for growing babies and juveniles. Adult leopard geckos should be fed every 2–3 days, and babies and juveniles should be fed daily. Wax worms and pinkies (baby mice without fur) are very fattening, and should rarely be offered to geckos so as to avoid obesity, and / or fatty liver disease. Pinkie mice are usually only offered to females in preparation to breed as they need a higher body weight to produce eggs. Many people believe that geckos are purely insectivorous, however in the wild they will eat anything they can overpower, including mice. Gut loading insects with nutritious grains, seeds, oats and fruits/vegetables is crucial to supplying proper nutrition to a gecko. Never leave extra insects roaming in the gecko's cage as they can bite the gecko and cause infection.

Copy of Cork Bark Round - Small